Eight of the last twelve years in the adoption process!

Just last week, I was matched for adoption with my third child and I am super excited!

I started my adoption journey back in 2010, with my first child being placed for adoption in 2012, she was 7 months old.

By 2013, I was back in the system trying to adopt my second.  This adoption was by far the longest process, as I never received the final adoption order (when the child is legally yours) until late 2017, taking me four years to adopt a child from start to finish, but boy was she worth waiting for! 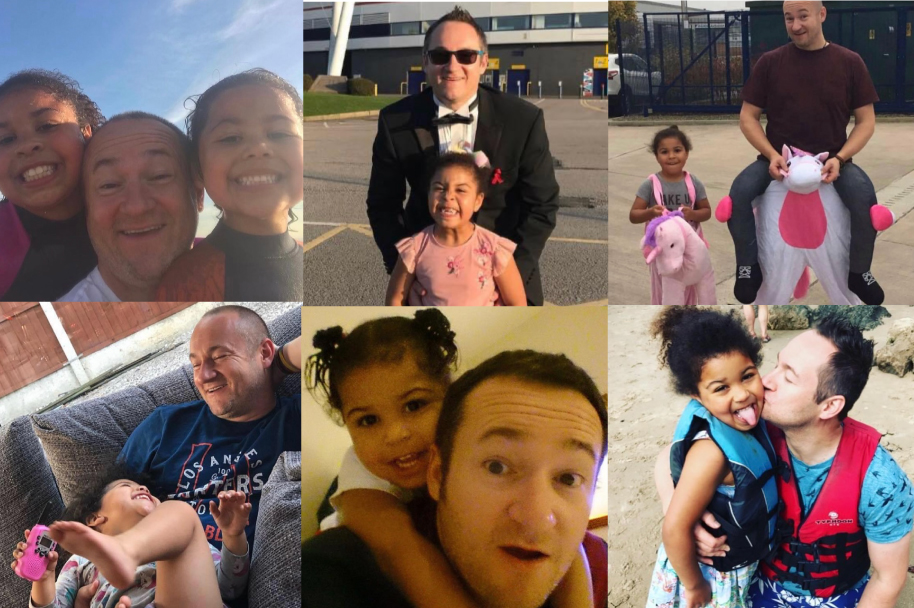 By 2020, with both my girls settled in school, I began the search for number three.

Growing up I had always wanted to have three children.  And now some of my closest friends do.  I love the dynamic and how they interact with one another.

Back then I ran scenarios through my head about their personalities and lives.  I think because I grew up with my dad, and my elder sibling living with my mum in a different address, I felt I grew up as an only child and I craved siblings.

When I came out as a gay man in the 1990’s, I thought that my chances to become a dad were over.  In fact, I had resigned myself to the fact that I would never have kids and I got a dog.

I had many discussions with my closest friends (with kids) exploring the options, like adoption and surrogacy.  Luckily for me, gay and lesbian families were starting to have kids.  They inspired me!  And I chatted to my friends John Amaechi OBE and Lou Englefield who had already adopted.

In Australia at a Pride event in 2000, a DJ warming up the crowd ahead of a big act coming on stage invited a small girl onto the stage for a chat to seemingly fill the gap as the musical equipment was being set up.  The overexcited girl was asked who she had come to the concert with, she replied without hesitation “I have come with my two mums”.  Like most of the crowd, tears rolled down my cheeks.  It was at this moment when I thought to myself that there might now be a slim chance that I would become a dad, as a gay man.

During my twenties, I was very career focussed.  I watched some of my friends have kids in their 20’s, some not really enjoying the experience as they had financial pressures on them and small dependents.  It didn’t feel the right time for me to explore having kids, yet but I became “uncle Dave” to many of my friends kids.

When I hit 30 I was on a career break spending a lot of time in Malawi, where I met thousands of AIDS orphans.  At that time, there were over two million children registered as an orphan (with a total population of 11 million).  And despite my best friend offering to be a surrogate for me, I couldn’t imagine bringing another child into the World when so many needed love and a home.

I also explored the idea of International Adoption, particularly from Malawi where I had such a strong connection.  This was steeped with difficulty as Malawi was not yet in the Hague Convention on the Protection of Children and Co-operation in Respect of Intercountry Adoption, meaning they didn’t follow International guidelines and therefore the process had more risks and difficulties.

If you didn’t know, the process for UK adoption is a bit like this;

1) Registration with an adoption agency – so many to choose from, public, private, charitable.
2) Assessment – weeks of checks and questions to get under the skin of an adopter.
3) Approval at Adoption Panel as an adopter – daunting the first time.
4) Social workers and family finders identifying your new child – they know you by now and what is right for your family.
5) Adopters themselves searching online for their new child or attending open days (not all adopters do this stage).
6) Matching Panel to a child – again can be daunting, but be honest about your wishes to extend your family and what you can offer.
7) Introductions to a child – depending on the age, can be a few days or two weeks visiting the child every day and taking care of them in the foster carers house.
8) Placement of a child – driving them away from the foster carer for the last time to start their new life with their forever family.
9) Application to court for Adoption Hearing – after the child has been placed for ten weeks.
10) Adoption Hearing – Adopters do not attend, but birth parents might.
11) Family Day – A chance for the adopters and the child to meet the judge who has been part of the process, a wonderful celebration.

Forgive me if I have missed a step out, or called them the wrong name, but these are the ones that stick out in my head as milestones.

Some of these have set timeframes, some are hampered by social worker employment changes, rule changes, awaiting court dates and the general twists and turns of the process, like a family member putting themselves forward to look after the child you are expecting to bring home.

On a flight back from Spain in 2016, having told my daughter we were returning to the UK to collect her new baby sister, I was informed that a family member had put themselves forward.  This caused an eight-month delay before the little one was placed with me.  It felt like eight years at the time.  But sometimes you have to trust the process and accept the advice of social workers who are marvellous, child-centric human beings!

Adopting my second was the hardest of all three.  At that time, it was great news for the kids in care awaiting families, due to the profile of adoption being raised by the many adoption programmes on TV.  These programmes brought a lot of potential parents forward and coupled with the fact that judges had not been making adoption orders for children in care, meant that there were very few children (and even fewer babies) in the system to place with adopters like me, but yet loads of people like me waiting.  Adoption agencies were actively discouraging potential parents at registration time.

I suppose there is never a perfect equilibrium!  When we learn of some of the family situations that these children might encounter through no fault of their own, it’s hard to predict how many adoptive parents are needed at any one time.  And with too many adoptive parents waiting, some dropout and get a dog (I kid you not, I know many who gave up waiting and bought a dog).

Adoption is not for the faint-hearted, with the twists and turns, uncertainty, difficult decisions, but it is incredibly rewarding.  Simply knowing that you are giving a chance in life to a child who might have faced different circumstances is wonderful and I encourage you to think about this route if you are planning a family or wanting to extend your own family.

I have found social workers totally dedicated to doing the right thing for the children in care and helpful along the process.

If you are thinking about this and I can help you in any way, just give me a call.  Failing that is some brilliant information to be found here;

Just to give you some greater insight into the numbers… From 2015 to 2020 the number of children in care rose from 69,470 to 80,080.  Just to put that into perspective, all the following towns have a similar total population to the number of children in care in 2020; Aylesbury, Barnsley, Batley, Bedford, Bury, Chatham, Chester, Chesterfield, Darlington, Dudley, Eastleigh, Grimsby, Guildford, Halifax, Harlow or Hartlepool – hopefully, there is a town near you for comparison.

In the same years, the number of adoptions fell from 5,360 in 2015 to just 3,440 in 2020, with particular issues in the Black and Asian communities who are most likely to be in care, but less likely to be adopted.

I really appreciate you taking the time to read this.  Have a great day.