Electric power is not new.  Who remembers the milk float?  Personally, I remember driving electric forklift trucks at my dad’s factory as a kid.  Back then, they had almighty battery cells, often smelly and often leaking, always being repaired and slowly grinding to a halt as the batteries were winding down following plentiful use.  (Many times we had to shunt them with another truck to get them to their charging station, as they might stop dead).

But on a full charge, man did that forklift truck zip around.  This is pretty much the only similarity between those archaic workhorses and my Tesla, named by the kids, Magnum.

I hadn’t had a new car in ages.  For years I have bought second-hand vehicles, cars that were maybe a few months old which had already depreciated significantly, like the Mercedes E class I bought before Magnum, named by my kids, Snowy!  Spec’d up as a £45,000 car, sold less than 12 months old to me for £27,000.  Happy days!

During lockdown, I ordered my Tesla Model 3, dual motor.  I had experienced losing two friends in April 2020 and the stress of the lockdown and coming to terms with furlough, the Tesla was an early Father’s Day present to me.  (I also ordered a hot tub and new cooking pans).  I ordered new because of the massive tax savings from a zero-emission car.  Seriously, ask your tax advisor!

I can remember the excitement of going to the dealership in Stockport to pick up my first new car in years and experience the hype around Tesla!

Boy was I disappointed.  The dealership was dealing with opening up after lockdown, so I will excuse their nervousness and lack of interest a bit and remember to BE KIND.  They talked to me like I had watched every video every made by Elon Musk in robotic style.  They gave me a card to open the car and sent me on my way.

In the car park, I walked around the car and looked inside.  During transit, the car had clearly had its rear seats folded for travel, except they had been resting on upturned seat belts, so the rear seats were damaged.  But worse than that, the panel gaps on the doors were different sized from the top of the door to the bottom of the door, like some Datsun from the 1980’s.

I walked back to the dealership.  I couldn’t speak to any staff, (they were busy helping other customers with the delivery of their new cars), and they wanted me to download the app and register my complaint in that way.  I should have walked away from the dealership there and then, but eventually, a member of staff did speak to me, (once my complaint was logged on their system).  They reassured me that I could book it in to have these areas sorted at some convenient time in the future.

I was also given many other promises from the management at the dealership.

Driving the car home I enjoyed some of the amazing features and the speed.  Magnum can achieve 0-60 in 3.2 seconds.  She launches to this speed like a rocketship, often amusing any passenger.  She is not for the faint-hearted or the old who seem to feel nauseous after a launch.  She is filled with gizmos and karaoke, so the kids naturally love her.  Her onboard trumping machine, Christmas mode, or rainbow road are their favourites!

That Summer, we took her on a long trip to Peppa Pig World.  I filled her to the top, (metaphorically speaking) and set off with the kids. The car has a 300 mile range (manufacturers guidelines), so we didn’t need to stop.  But of course, within 30 minutes of driving, Magnum was adjusting the range of the battery dependant on the speed and travel conditions.  Of course, if you drive Magnum like a scene from “Driving Miss Daisy” then 300 miles can be achieved. (I think if you drop it out of an aeroplane from 40,000 feet – and trust me I’m tempted – she will also achieve the manufacturer’s guidelines), but at 75 (coughs) miles per hour, 150-175 miles is more realistic.

So I stopped at Keele Services to rest and give the kids a break.  On arrival, I found easily the official Tesla charging points.  They were plentiful and each of them had two plugs.  I parked at the back of the charge point and plugged in.  I was confronted with an irate Tesla S driver who continued to tell me I couldn’t park there, it wasn’t an official Tesla spot.  I asked him if he had a space and if he could charge his own car and he replied “yes, but you are in the wrong space”.  I had two children with me under nine, at this point requiring a toilet break.  I really couldn’t see what his issue was or why he was beefing it with me, so I left him standing in the car park shaking his head/fist and went into the services.

Fortunately, I haven’t had any pump rage since then, so I will simply put it down to him having a bad day.  And in total honesty due to the lockdowns, I haven’t needed to charge Magnum anywhere other than home or the office, despite doing over 7,000 miles.

Tesla is very clever, it works out all the charge points and readjusts all the time to help with range anxiety.  Tesla is not clever in that it assumes you can always charge at your destination.

I had specifically chosen a hotel with Tesla charging points near Peppa Pig World.  I had phoned through to check these were working.  “I think so”.  On arrival, there were three charge points.  One was broken, one had sand in it and was intermittently working and the final one had a golf cart parked in front of it.  Now I was pretty lucky to find the driver of the golf cart and pretty lucky that none of the other occupants from the 140 rooms had a Tesla and needed a charge!

Peppa Pig World was incredible.  The kids still talk about it.  And we will return this summer.

We charged again that night before heading to see friends in Southampton and Maidenhead.  We then left for the North.  No more pump rage and no more issues.

A successful long trip.  And to be honest, on a three or four-hour journey it makes sense to park up, have a rest.  The kids love watching Netflix, playing with the gadgets, and singing Karaoke.

I am coming up to one year of ownership of Magnum and I am fascinated with everyone’s interest in her.  Just last weekend in Anglesey, two 15-year-olds stopped for a chat, they asked me to “Rev it”… I laughed and told them it was silent.  My kid’s friends think my kids are cool because their dad has a Tesla.  I am asked loads of questions about it, especially by older folks.  Just yesterday the volunteer at the COVID vaccine centre said “I love your car, is it any good?”  I have adapted my first response to… “what do you currently drive?”.  He pointed at a Mini Cooper S.  Having had two of those, I said “Stick with your Mini”.

Personally, I think if you drive a 1980’s Datsun right now, you are going to love the Tesla.  If you drive anything with better build quality than a 1980’s Datsun, then you are not going to get on with the Tesla and be frustrated with rattly door bins, leaking, and fogging light clusters, as the built quality is shockingly bad.

I’m not forty stone and neither have I done 150,000 miles, but the wear and tear on the driver’s seat looks like I am and I have.

Living near Manchester, far too often I am stood in the rain holding shopping while the car decides if it will open or not with the key card or via my phone.  Just like your computer, it may decide to do an update just when you want to go for a drive, and often the screen (which has all the info about speed and how you control everything including windscreen wipers, etc) will go blank, so you need to pull over to the side of the road and do a reset or get a speeding ticket and crash, due to not being able to see out of the windows or know what speed you are doing!

For sixty grand, you really ought to get something better than a car and service delivered from some backstreet car dealer (that is being really unfair to backstreet car dealers).  In fairness to Tesla, they have realigned some of the doors, but have not fixed the seats or light clusters.

We all need to embrace low carbon vehicles.  The UK Government has mandated that no one can sell a new Petrol or Diesel car by 2030 (and that is totally the right decision).  But we have a quandary.  Do we buy a Tesla with amazing battery technology, but shocking build quality?  In my opinion, they really shouldn’t be allowed to sell cars.  Or do we buy an electric car from one of the traditional car manufacturers, who haven’t quite got the battery and gizmos?

After my experience, I would buy from a car maker who is known for quality cars all day long.  So come on car manufacturers, pull your socks up and offer some decent technology and batteries to go with your quality cars!

Does anyone want to buy a used Tesla?

I would love to know your experience of owning a Tesla, so please let me know. 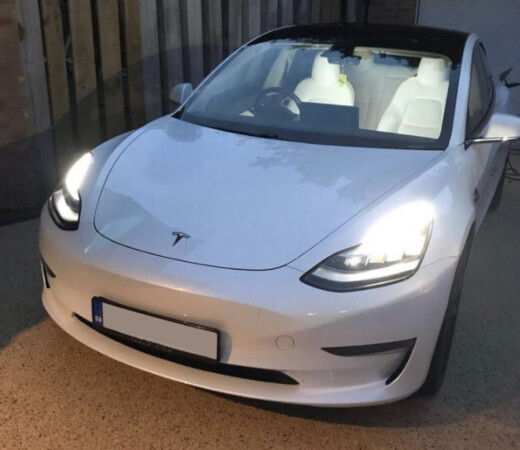